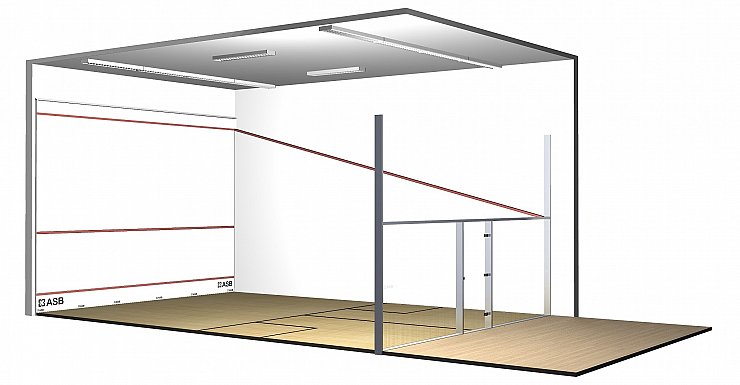 One of the most underestimated parts of a squash court is actually very essential for the game: squash court lighting. WSF court specification rule 11 states that “the court shall be lit by artificial light” and the level of illumination is at least 300 lux, measured at 1m above floor level. Although a minimum of 300 LUX is technically permitted, reality shows that playing characteristics are extremely altered and players having huge problems seeing the ball. There is really only one solution to amend this problem.

– designed for mounting into ceiling grids and plasterboards

Growing environmental and economical demands on technical facilities and customers´ interest in progressive hi-tech technologies have inspired ASB to innovate court lighting. „A LED lamp is a lightemitting diode (LED) product that is assembled into a lamp (or light bulb) for use in lighting fixtures. LED lamps have a lifespan and electrical efficiency that is several times better than incandescent lamps, and significantly better than most fluorescent lamps, with some chips able to emit more than 100 lumens per watt. Like incandescent lamps and unlike most fluorescentlamps (e.g. tubes and CFL), LED lights come to full brightness without need for a warm-up time; the life of LED lighting is NOT reduced by frequent switching on and off.

ASB CourtLED lighting offers an alternative solution for customers with demanding requirements. Its lifespan of 50.000 hours goes five times over the fluorescent lamps, if specific conditions are met, which eliminates degradation of LED chip. Another big benefit of the LED lighting is evenness of illumination on the whole playing area of the court.