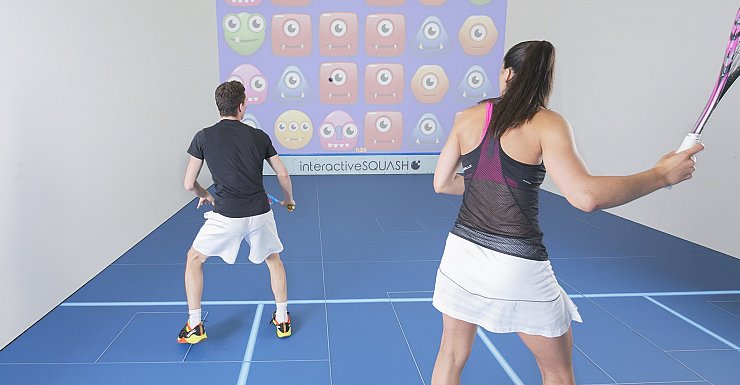 interactiveSquash training modules assess and coach; speed, accuracy, technique and conditioning with instant visual feedback and analysis. This world-first allows squash players to see their performance down to each individual shot. They gain valuable insights into their game, supported by personalised statistics. interactiveSquash is an immersive tool for coaches to engage budding squash talent.

The games are designed to get people moving and active like never before. New modes and rules give squash players the option to play solo or cooperatively in conquering a range of exciting content which put their skills, accuracy and fitness to the test.

This internet-connected, smart system will be maintained throughout its lifespan with regular updates. When new games and training programs are published, they are instantly available to download and play in every interactiveSquash court. Fun With Balls GmbH, the company behind interactiveSquash has teamed up with coaches and professional players to develop new features.

Can regular competitive squash be played on an interactiveSquash court?

Yes. Players use regular squash equipment – no extra controllers or gadgets required. The hardware does not interfere with the play area and the system can be adapted to integrate seamlessly with almost any court.

interactiveSquash courts track players’ games, detect and provide both players with individual statistics on their game.

For every player that has ever wondered:

Who dominated the T the most?
Which player has the most efficient movement?
Who made the most winning shots?

interactiveSquash has the answers to these questions and much more.

How does interactiveSquash work?

Regular squash balls are tracked with sensors. The system is safe, user-friendly and maintenance-free. Players receive visual feedback from graphics projected on to the front wall via a ceiling-mounted laser projector. This state-of-the-art projector has a lifetime of more than 20,000 hours before requiring maintenance.

Can existing squash courts be upgraded to interactiveSquash?

Yes. An upgrade is simple and hassle-free. Installation is simple and fast. interactiveSquash is a turnkey solution that integrates seamlessly with existing courts.

Where can I purchase interactiveSquash?

The product ships worldwide. Systems can be purchased exclusively through our sales and distribution partner, ASB Squash. They are experts in court construction and their team can provide personalised advice on how to upgrade your court as well as cost / leasing options.

If you are interested in purchasing, but are not already in contact with ASB Squash, please send an e-mail to isquash@asbsquash.com

interactiveSquash is an all-in-one package upgrade.

The interactiveSquash beta system ships with all of the above hardware and includes instant access to the games and training modules described in this document and more.

Requirements:
• Dedicated power outlet
• Ceiling mount space (approximately 7 meters from the front wall)
• Ceiling must be able to bear a load of up to 80kg
• Active internet connection

Installation of a turnkey solution

Upgrades can be performed on most court types.

interactiveSquash is designed as a turnkey solution with minimal extra fuss.

If you are planning a new squash court or upgrading an existing court, we recommend that you contact our partners ASB Squash who will offer professional advice on getting the most from your interactiveSquash court. They can provide a range of optional extras to suit your specific needs.

To date ASB has supplied more than 6,000 ASB SquashCourts to satisfied customers in more than 70 countries.

Games are designed to be fun and engaging with multiple levels, lively graphics and sounds. They have been created under the motto ‘Focus on the fun and not the burn’. Some might tell a story, others are just to let squash players try a new style of play. All are guaranteed to keep players coming back for more.

Described here are just a small portion of the many games which are already available on the system. More games are currently in development.

BlockSquash
Video game fans will recognise BlockSquash as a modern spin on an influential arcade game.

The aim of each level is to carve a path for a giant sphere to get from the startzone to the end-zone. Using a regular squash racket and ball, players must hit the blocks to make them explode.

BlockSquash can be played solo or two players can team up to conquer the wall cooperatively. Players will be given a grade at the end of each level based on their accuracy and speed.

Splash
Splash is a casual game which has no goals or aims. Hitting the wall causes paint to splash against it, leaving colourful blotches. Great for players looking to unwind and get creative or for trainers that want to keep younger talent engaged with instant visual feedback.

Splash livens up regular squash games and functions as an ideal pre-match warmup. The pace of play is completely up to the players.

TicTacSquash
In TicTacSquash the rules are simple – connect three and win. Like regular squash, players take turns hitting the ball against the front wall. Unlike regular squash players must light up three areas in a row to win a round. This head-to-head game encourages players to block the opponent’s areas by switching the colours with a well placed shot.

Later levels put player’s accuracy, tactical thinking and speed to the test when the play-area moves and the targets get smaller.
TicTacSquash can only be played against an opponent.

Goal!
Goal is virtual air hockey. The aim of Goal! is for players to hit the puck into the opponent’s goal with their shots. Shots landing closer to the puck will push it faster. Like regular squash, players take turns hitting the ball against the front wall.

Goal! can only be played against an opponent.

Goal! is all about fast-paced action with players scrambling to defend their goals whilst mounting devastating counter-attacks. It is great for players who want to duke it for quick sprints and bragging rights.

FishTank
FishTank is the first interactiveSquash aimed at younger players. The goal is to tickle friendly fish and scare away bad fish with a hit. Treasure chests unlock exciting bonuses.

The bright graphics, whacky sound effects and simple gameplay are great for young children – they don’t even need to use a racket to play. Fantastic for teaching them basic hand-eye coordination and getting them active.

Apps - interactiveSquash on your smartphone

But the experience does not just begin and end at the court. The accompanying interactiveSquash smartphone app connects players to a world of ever-expanding content.

Court-side, the app doubles as a remote control which lets players control the court from the palm of their hand. They can swap between training and game modes in an instant.

The app will also foster an online community of interactiveSquash enthusiasts by enabling them to connect with each other, compare statistics, brag about their scores and share their squash stories on social media.

The interactiveSquash app will be the pocket-sized coaching tool for customised training modules with user-defined targets.

Running a workshop on lob shots?
Trying to get a student to visualise a specific target?
Want to keep younger players engaged for longer?

With interactiveSquash the potential for customised content, games and training programs is virtually limitless.

The future of training

interactiveSquash training modules are designed to hone skills and techniques which relate directly to competitive squash play-styles. Players will receive visual cues, feedback and assessments on their performance. Projected targets and hits are displayed.

Below are some of the first training programs available on the interactiveSquash. More are coming soon.

LonglineSquash is the first training module to have been developed for the interactiveSquash system. Designed to help players stay accurate under pressure, LonglineSquash adds a challenging new element to regular training. Players can train both forehand and backhand drives on both sides of the court with instant feedback.

LonglineSquash can be played solo but also works well when implemented in group coaching sessions.

Butterfly coaches the squash butterfly volley technique, an essential drill for paying attention to readying and opening the face of the racket. This program measures and then displays exactly where the ball hits the wall. This trains players to strike with more power and precision on their forehand and backhand, whilst reminding them of their court positioning.

Butterfly can be played solo but also works well when implemented in group coaching sessions.

TrainingWall is a target layout for players to practice a variety of shots. It can be customised to meet skills (i.e smaller targets for advanced players).

TrainingWall can be played solo but also works well with a partner or when implemented in group coaching sessions.

There are multiple benefits to upgrading to an interactiveSquash court.

Offer an exciting world-first to your customers. Increase revenue from your courts, increase visitor frequency and drive new visitors to your squash court and reach new audiences with relevant advertising.

Our market research indicates that customers are willing to pay 10-60% more to play on an iSquash court when compared to a normal court.

In addition to the basic hardware unit costs, the operating costs for iSquash courts come in various models to suit different budgets and purposes. They guarantee that your iSquash system will be kept up-to-date and upgraded with fresh content to keep players entertained and interested.

Use revenue shared from our network of ads to off-set the costs of your system. Club and premium licenses allow court owners to run their own ads or even sell ad space to local businesses. (THIS FEATURE IS IN DEVELOPMENT AND SLATED FOR EARLY 2017).

Early adopters can purchase a reduced ‘BETA’ license fee which provides access to the full range of apps.